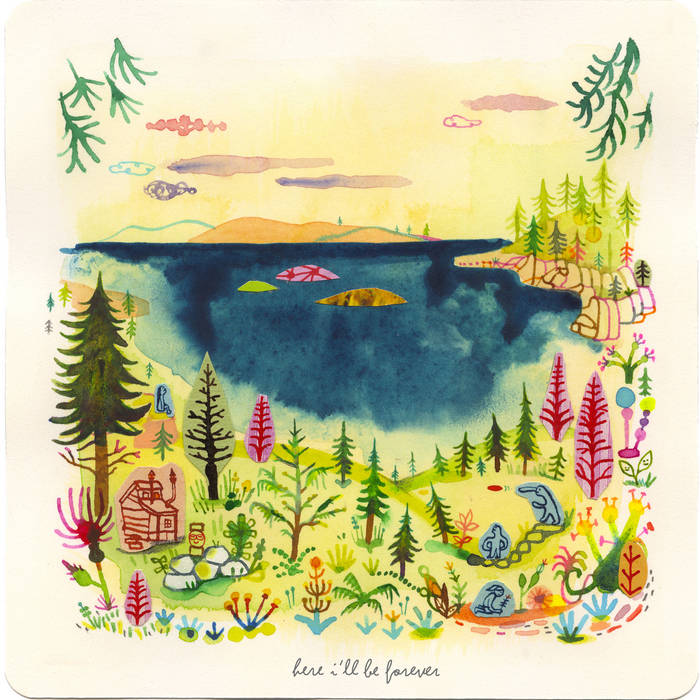 Dakota Sillyman A beautiful tape that let's you know that everything will be alright. One of my all time favorites. Favorite track: sarasota.

mini50records Such an interesting work.

Arien Wolf-Knight helps me appreciate the world around us more Favorite track: trails to the peaks of mtns.

Brian Lee Sometimes bordering on precious, but so earnest I can't help but find it charming. A feel better listen for these feeling bad all of the time times. Favorite track: for ppl who make music instead of dreaming at night.

No Fear Of Pop

assembled in fragments over the course of three years, here i'll be forever is a message of comradeship and solidarity to tender (and angry) humans worldwide: we can exist and thrive apart from our toxic dominant culture. we can develop and nurture communities founded on empathy, accountability, and abolition. in our everyday actions we can practice the foundation for something truly transformative, a place that is for everyone who is willing to work together to make a meaningful difference.

i want to dedicate this album to richard vega, who passed away in november of 2k15. growing up he taught me that this epoch is not constructed for us. in that illision we have the opportunity to write our own futures, create networks of mutualism, and in doing so construct our own paradigms. this album is for everyone we've lost.

thank you to my friends for supporting me and encouraging me to make + share this album. thank you to my mom for being the most generous and selfless person i've ever met. thank you to the silent barn for forcing me to question every fiber of my being. thank you to ak press, the all ages movement project, amy goodman, angela davis, audre lorde, augusto boal, bell hooks, ben morea, death by audio, dreamhaus, ghost ship, irving teibel, junior high, malik rahim, lucy parsons, nelson mandela, paolo freire, pehrspace, people of rojava, rhinoceropolis, semiotext(e), shark tank, shea stadium, wendy carlos, the zapatista army of national liberation, and those i'm not even familiar with for your sacrifice and inspiration.

Bandcamp Daily  your guide to the world of Bandcamp

Serena Cherry debuts her black metal project, plus a Pick from the Crypt block from Svalbard